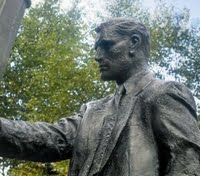 It will be the second time the CS Lewis Festival will open its gates again in Belfast. CS Lewis was born in Belfast in 1898 and he is one of the most famous and well known writer in the English literature.

He is one of the most influential authors in the world and he is one of the most important writers of the 20th century. CS Lewis is best known for his Chronics of Narnia in the English language. This year at the festival the second time visitors will have the chance to discover more on the life and works of CS Lewis. During the festival there will be a wide range of programs for the visitors. The festival will take place in Belfast based in the east side of the city where CS Lewis spent most of his childhood. During the festival there will be plenty of outdoors activities and family events such as film screenings, art exhibitions, tours, workshops and readings. The CS Lewis Festival will be held from Thursday 20th November 2014 until Saturday 23rd November 2014 in Belfast.